The Robert Sinclair and Co. former shirt factory is a key landmark building in the city – a B1 Listed Building, at a key entry point into the City Centre and also within the Historic City Conservation Area.

It is intended that this development proposal when fully developed will create 300-350 new jobs in the City.

As the building has been vacant for many years and is in poor physical condition it is on the Ulster Architectural Heritage Society (UAHS) ‘ Heritage Buildings at Risk Register’.

It is of the upmost importance for the City’s built heritage that buildings such as this building finds new beneficial economic uses which will refurbish and revitalise this historic building.

The approved conversion of the factory building will secure its upkeep and survival.

The developers hope that the refurbished building will be occupied by Summer 2016.

This application was submitted on the 22nd of December 2015, it was then taken to council and approved on the 2nd March 2016. 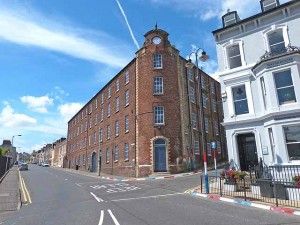